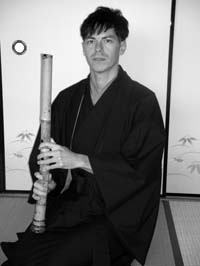 Josh Smith is from Buffalo, NY and currently lives in Katsuragi City, Nara Prefecture. He graduated from Buffalo State College and received his Master's degree from the Graduate School of Human Sciences in the Cultural Sociology Department at Osaka University. He is currently writing his Doctoral thesis on the shakuhachi and change within this art world at the Graduate School of Human Sciences at Osaka University.

He studies the shakuhachi under Okada Michiaki, himself a student of the famous Yokoyama Katsuya. He studies traditional Zen meditation pieces called honkyoku, but also plays modern and traditional classical music in ensembles as well as writes his own compositions. In addition to his solo activities in Nara and the Kansai area, he performs as a unit called "Kurofune" that he formed with Izukawa Shido. They have performed on TV, as well as national and international radio. He is a member of the International Shakuhachi Kenshu-Kan, Komuso Kenkyukai, the Society of Research in Asiatic Music, the NPO group "Fuke! Hogaku no Kaze (Blow! The Wind of Traditional Japanese Music), and a friend of Ishikawa Toshimitsu's "Ishi no Kai". He teaches the shakuhachi in his dojo, "Joshu-an", at his Taima dojo, Naramachi dojo, and Fukui dojo. Josh earned the second-place award last summer in the World Shakuhachi Competition held at Sydney, Australia. In February 2009, He received the title of "Master Performer" from Nakanobo at Taimadera Temple in Nara. He has performed at various events both in Japan and overseas, including the pre-events of the Nara Sentosai, Takefu International Music Festival in Fukui, the International Music and Arts Conference at Ateneo de Manila in the Philippines, and Burchfield-Penny Art Center in Buffalo, NY etc. He released his solo CD called "Sound of the White Phoenix" in November, 2008 that contains traditional Zen meditation pieces and original shakuhachi music, and he had a CD release concert at Taimadera temple. In May, 2009, Kurofune released their first self-titled album that Izukawa Hidefumi sound produced with the shakuhachi and electro-acoustic music. Together with Izukawa's mastery of classical western music, Japanese music, and composition, they have performed throughout Japan, Canada, and NY, bringing a unique blend of traditional music with modern elements to their listeners. Josh strives to maintain a traditional sound as well as explore new outlets of creativity in various genres of music. 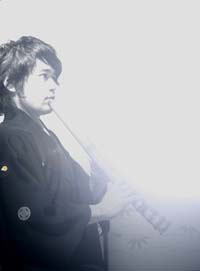 Izukawa was born in 1981, and he is from Suita City in Osaka. He graduated from the Osaka University of Arts in music technology. He first encountered the shakuhachi when he took a class at the university. Later, he met Satoshi (Zenpo) Shimura, associate professor and a researcher of Jinashi Shakuhachi. Sharing Shimura's thoughts, he decided to pursue the succession of the vanishing Komuso Shakhachi.

Izukawa seeks for the playing style of "Suizen," which is a way of Zen meditation for Myoan Taizan School shakuhachi, and the sound of Jinashi Shakuhachi called "Neaji (Taste of Sound)." In 2008, he formed a unit called "Kurofune" with an American shakuhachi player Josh Smith in whom he found to have "the power to deliver and express which firmly stems from his amount of practice." They promised to deliver the fascinating sound of Jinashi Shakuhachi and spread their music to the world. They have recently performed a fusion of shakuhachi and electro acoustic music at a pre-event for the "Nara Sentosai" and "Takefu International Music Festival," and their activities are often followed by the media. They have been active giving lectures in New York, and Paris, and performing at many museums and music festivals both in Japan and overseas. They released their first album "Kurofune" in May 2009, and it was highly reviewed in many places. He studies Myoan Taizan School shakuhachi under Simura Zenpo and Ikuta School koto under Shimura Chieko.

He has taken professional western music education since he was a child, and he is versatile having been a member of a rock band to being a singer-song writer. He has established his own creative policy just as he sought for the unique spirit within Japanese traditional music. He has worked on sound producing which crosses genres. He has put his effort in the development of electro acoustic music, and he is attracted to "Acousmatic -Music." He took the first place in the CCMC Composition Contest in 2008, and he also won the ACSM116 Award and FUTURA Incentive Award at the same time. He won the best presentation award at the 81th meeting of IPSJ-SIGMUS. He joined the MOTUS (France) Composition Atelier 06. His pieces are sponsored in many international music festivals and performed in FUTURA (France), Silence (Italy), and aired on the FM radio RSF (France). He studied composition from UEHARA Kazuo, Acousmatic-Music from DUFOUR Denis, and HIGAKI Tomonari.